On the other side of Jordan

Deuteronomy begins with the statement “These be the words which Moses spake unto all Israel on this side Jordan in the wilderness” (Deuteronomy 1:1, KJV) – something that can be confusing to readers. Why does it say “this side Jordan” and why is this such an important issue as it relates to the authorship of the text? What clues are contained in the very first verse of Deuteronomy? Why does this matter? 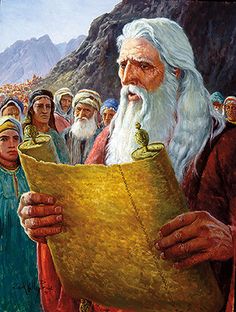 Deuteronomy 1:1 is the beginning of the story of Moses standing in front of Israel, retelling the most important events as they occurred in their past, instructing Israel to not forget the greatness of their God. Chapters 1-4 are the beginning of this instruction, with chapters 5-26 a supposed Mosaic review of their law (with radical changes when compared to Leviticus and Exodus), and finally we have chapters 27-30 which is a message of blessings and cursings in relation to the covenant Israel has entered into with their God. Chapters 31-34 cover Moses’ “death” as well as succession. Much will be written on this notion that Moses renarrates much of what he has spoken for the last 40 years while with Israel, and why this renarration has some clues as to who put the text of Deuteronomy together and why.

Why the text is called Deuteronomy

Deuteronomy is a title formed from the two Greek words deutero, “second,” and nomos, “law.” Thus, the title means “the second law,” or “the repetition of the law” (see Fallows, Bible Encyclopedia, s.v. “Deuteronomy,” 1:522). The Christian world adopted this descriptive title from the Septuagint (the first Greek translation of the Old Testament written in the second century before Christ) rather than the Jewish name for the book, Eileh Hadvareem, which is the first two words of the book in Hebrew (translated as “these be the words”). 1

What the KJV translation of Deuteronomy 1:1 says, why it matters and what is really happening here in the text

What the KJV text says

The text gives us clues that Moses did not write this book. The clues are literally everywhere. Today I just want to talk about verse 1. In the King James Version of this text we read the following:

1 These be the words which Moses spake unto all Israel on this side Jordan in the wilderness, in the plain over against the Red sea, between Paran, and Tophel, and Laban, and Hazeroth, and Dizahab.

2 (There are eleven days’ journey from Horeb by the way of mount Seir unto Kadesh-barnea.)

3 And it came to pass in the fortieth year, in the eleventh month, on the first day of the month, that Moses spake unto the children of Israel, according unto all that the Lord had given him in commandment unto them;

5 On this side Jordan, in the land of Moab, began Moses to declare this law, saying… (Deuteronomy 1:1-5)

The reader is to note that it reads, “on this side Jordan” twice, once in verse 1 and again in verse 5. As the reader of the story of Moses will probably already know, Moses didn’t step into the land of Israel according to the account in the Hebrew Bible. The author of Deuteronomy gives us the reason as to why:

48 And the Lord spake unto Moses that selfsame day, saying,

49 Get thee up into this mountain Abarim, unto mount Nebo, which is in the land of Moab, that is over against Jericho; and behold the land of Canaan, which I give unto the children of Israel for a possession:

50 And die in the mount whither thou goest up, and be gathered unto thy people; as Aaron thy brother died in mount Hor, and was gathered unto his people:

52 Yet thou shalt see the land before thee; but thou shalt not go thither unto the land which I give the children of Israel. (Deuteronomy 32:48-52. See also Numbers 20:12)

So here we have Moses, who never set foot in Israel, speaking to the Israelites in Deuteronomy chapter 1 “on this side Jordan”… what is going on here?

What we have is a very clunky translation. Many other Bible translations have Deuteronomy 1:1 read quite differently.

Other Translations of the Text

These are the words that Moses spoke to all Israel beyond the Jordan in the wilderness, in the Arabah over against Suph, between Paran and Tophel, Laban, Haze′roth, and Di′zahab. (Revised Standard Version)

These are the words that Moses spoke to all the people of Israel while they were in the wilderness east of the Jordan River. They were camped in the Jordan Valley near Suph, between Paran on one side and Tophel, Laban, Hazeroth, and Di-zahab on the other.  (New Living Translation)

These are the words that Moses spoke to all Israel in the wilderness east of the Jordan—in the Arabah opposite Suph—between Paran and Tophel, Laban, Hazeroth, and Di-zahab. (Berean Study Bible)

These are the words that Moses addressed to all Israel on the other side of the Jordan. Through the wilderness, in the Arabah near Suph, between Paran and Tophel, Laban, Hazeroth, and Di-zahab. (The Jewish Study Bible, Jewish Publication Society)

The point here is that Deuteronomy is written from the perspective of an author who is writing this text while in Israel, and he is writing about Moses being on “the other side” of the Jordan River. If this were an account literally written by Moses, he would not have used words like this, since according to the text of Deuteronomy, he never set foot in Canaan/Israel!

In fact, the word used for translating “this side” is עֵבֶר eber, a word that means “a region across” or “on the opposite side” – which is how many other translations effectively translate it. Perhaps the King James translators give us this other rendering in order that Deuteronomy may seem to not have contradictions. Yet this twice repeated error, one in verse 1 and again in verse 5, definitely cloud the meaning of the text!

Speaking to these verses, from the Jewish Study Bible we read the following:

On the Other side of the Jordan, designating the land east of the Jordan River (Transjordan), where the Israelites have stopped, awaiting entry to the land. That geographical frame of reference places the speaker west of the Jordan and thus already in Canaan. According to the narrative line, however, the Israelites have not yet reached the promised land and Moses never does. From this and similar anachronisms, a small number of medieval Jewish commentators already recognized that not all of the Torah could be attributed to Moses; this is the modern consensus as well. The Arabah, the rift valley that includes the Jordan River and stretches south from the Dead Sea into Africa. The places mentioned cannot be identified with certainty. 2

From the very beginning of Deuteronomy, there are clues as to its production. It becomes apparent that Moses did not write this text, at least as we now have it. In the following posts, I will demonstrate that there are several textual clues that together compose a strong case for Deuteronomy being a later production. It is my position that Deuteronomy is a text that was written sometime between 700-600 BCE, probably in the days of Josiah (around 640 BCE), and that this text radically changed the religion of the Jewish nation at that time. The scribes who put this text together had access to other traditions of Moses, what scholars call the Priestly text, or P, and the Jahwist and Elohist texts, or JE. 3 I contend that with J,E, and P in their hands, these scribes reworked this material to make Moses say things that he didn’t necessarily say in JE and P in a new textual construction, what we today call the Book of Deuteronomy. 4 This was done so as to centralize the worship of Yahweh in Jerusalem and to strengthen the position of the people who put forth this text, what scholars today call “The Deuteronomists.”

1 Response to On the other side of Jordan