Punning Around – Jacob and Laban’s Double Talk in Genesis 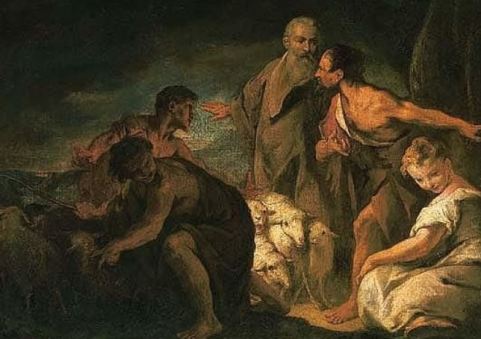 He writes, “The web of puns and deceptive speech serve a similar literary function. It is through their (Jacob and Laban’s) deceptive words that the characters convey their deceptive intentions and we, as readers, are tricked along with the victims. This enables us to empathize with the deceived and to define the characters’ behavior. Yet, the literary device also belies a theological agenda. Since the narrator/redactor also engages in punning, we must see the word play phenomenon as an authorial tool to force the reader’s participation in the story, a narrative that can be clarified only as it unfolds. All along he reminds his readers through word plays that God repays both deception and acts of kindness in kind. 1

How did Nephi use a pun on his own name?

How does the Book of Mormon use a Hebrew pun on Noah’s name?

Matthew L. Bowen, “And He Was a Young Man”: The Literary Preservation of Alma’s Autobiographical Wordplay.

Matthew L. Bowen, “Most Desirable Above All Things”: Onomastic Play on Mary and Mormon in the Book of Mormon. Interpreter: A Journal of Mormon Scripture 13 (2015): 27-61.

Matthew L. Bowen, Onomastic Wordplay on Joseph and Benjamin and Gezera Shawa in the Book of Mormon. Interpreter: A Journal of Mormon Scripture 18 (2016): 255-273.

Robert F. Smith, Puns, Paronomasia, and word-play in the Book of Mormon.

I write about ways scripture applies in our lives: LDSScriptureTeachings.org
View all posts by LDS Scripture Teachings →
This entry was posted in Old Testament and tagged Ancient Near East, Ancient Near Eastern Literature, Paronomasia, puns, puns in the Bible, Wordplay. Bookmark the permalink.