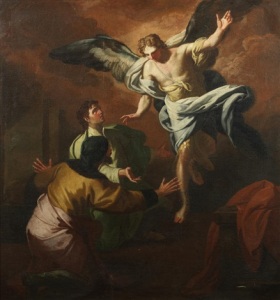 Daniel 9 is about Daniel’s confession that the reason for the destruction of the temple in Jerusalem and the captivity is due to the failure of the Jewish people to be faithful to the covenant (Daniel 9:1-19). It is during this prayer that “the man Gabriel” appears unto Daniel (Daniel 9:21). He informs Daniel that “seventy weeks are determined upon thy people” (verse 24). After this, Gabriel tells Daniel, “after threescore and two weeks shall Messiah be cut off, but not for himself: and the people of the prince that shall come shall destroy the city and the sanctuary; and the end thereof shall be with a flood, and unto the end of the war desolations are determined.”

From the Institute Manual, we read the following:

The Hebrew word that is commonly translated weeks would more properly be translated sevens. It means a period divided into sevens. The phrase “seventy weeks” thus refers to seventy periods of sevens. These periods of seven could be days, weeks, months, years, or even periods of unspecified duration. Because of this variation, it is difficult to tie Gabriel’s explanation to specific historical time periods, but many attempts have been made to do that, resulting in several differing interpretations of the passage. Sperry called these verses “one of the most difficult passages in all of the Old Testament” 1

Though the time periods mentioned are difficult to identify, the context and several phrases in the passage indicate that the passage has to do with a period in which the salvation of Daniel’s people is to be accomplished. Daniel 9:24 is undoubtedly a reference to the coming of Christ and His Atonement, by which forgiveness of sins and reconciliation to God through repentance would be made possible. By completing the mission His Father sent Him to accomplish, Christ fulfilled the law and the words of the prophets concerning His coming, and thus did He “seal up [make sure] the vision and prophecy” (v. 24). Verse 25 refers to the time between the return of the Jews to rebuild Jerusalem and the coming of the Messiah. Verse 26 makes reference to the Messiah being “cut off, but not for himself,” which seems to be an allusion to His Crucifixion. The rest of the chapter describes the destruction of Jerusalem and the temple and parallels very closely the message of Matthew 24:15 and Joseph Smith’s inspired revision of that verse (see JS—M 1:12). The reference to confirming the covenant for one week (see Daniel 9:27), however, has not been satisfactorily explained and may make problematic the explanation given above.

Some problems with Daniel 9

According to this writer’s chronology the first year of Darius the Mede was 538 BCE… Ahasuerus means Xerxes, a fictitious parent for a fictitious Darius. The problem with Darius is that no ruler of Babylon is known from our historical sources by this name prior to the time of Darius I of Persia (522-486 BCE). So who was in control of the Ancient Near East in 538 BCE? Cyrus the Great – he was ruler from 559-530 BCE. He was the ruler that liberated the Jews, allowing them to return to their homeland and rebuild their temple. There is a Persian ruler named Darius, but he was 12 years old when the events in Daniel 9 transpired, therefore he would not have been the ruler identified in this chapter as “Darius the Mede”. Darius ruled Persia from 522-486 BCE.

An assumption of some scholars has been that the Book of Daniel was authored by an unknown writer of the Maccabean age (164 BCE) who mistakenly thought that an independent Median kingdom ruled by Darius the Mede followed the fall of Babylon and preceded the rise of Persia under Cyrus.

A counter argument to this would be that Darius the Mede is not depicted in the book as a universal monarch. His subordinate position (under Cyrus) could be implied in the statement that he “was made king (Hebrew passive, homlak) over the realm of the Chaldeans” (Daniel 9:1). Also, the fact that Belshazzar’s kingdom was “given to the Medes and Persians” (Daniel 5:28) and that Darius found himself incapable of altering the “law of the Medes and Persians” (Daniel 6:15) provides an alternative argument to the critical approach to the book of Daniel.

The early 20th century publication of additional cuneiform texts from this period has enabled one to understand much better the circumstances surrounding the fall of Babylon in 539 BCE. It seems possible that Darius the Mede was another name for Gubaru, the governor under Cyrus who appointed sub-governors in Babylonia immediately after its conquest (“Nabonidus Chronicle,” ANET, 306; cf. Daniel 6:1). This same Gubaru (not to be confused with Ugbaru, governor of Gutium, the general under Cyrus who conquered Babylon and died three weeks later, according to the Nabonidus Chronicle) is frequently mentioned in cuneiform documents during the following fourteen years as “Governor of Babylon and the Region Beyond the River” (i.e., the entire Fertile Crescent). 2