Ephraim Hanks A Model of Obedience 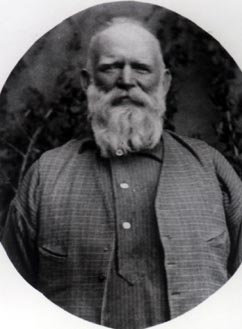 The following illustrates the way in which the great quality of obedience was part of the character of this legendary pioneer: “On many occasions Ephraim Hanks was rewarded for his obedience to the Prophet Brigham Young. One spring morning he was at work, building an adobe house in the city. The basement was almost completed and he was just beginning to lay the sun-dried brick when Brigham drove up in his carriage and said, ‘Ephraim, how thick is that rock wall?’ Ephraim answered that it was eight inches thick. Brigham said, ‘Tear it down, Ephraim, and build it twice as thick.’ Then as if to avoid argument, he turned his carriage around and drove away. Ephraim had been hauling rock from Ensign Peak for many days, and had paid a mason a good price to lay it in lime mortar. He dreaded the extra work and expense of doing it all over again. The mason, too, showed his disapproval by swearing and remarking, ‘Brigham Young may be a saint, but he’s no kind of a prophet about building stone walls.’ Nevertheless, Ephraim re-contracted with the stonemason to double the wall, and the next morning started hauling rock again. A month later they had laid on this sixteen-inch wall much adobe brick and mud. As they were putting up the rafters, a terrific storm started. Rain fell in sheets causing streamlets of water to run in all directions. In a few minutes the basement of the new house was flooded, but the sturdy, thick walls stood safe and strong, supporting the house. A few days later when the water had drained out and they finished laying the rafters, Ephraim drove in nails to the tune of ‘We Thank Thee, O God, For a Prophet.’ 1

“Many times President Young called men to do things as a test of their faith. One evening at a dance, Brigham called Ephraim over to him and asked him to go home and shave. Like all the strong, virile men of that day, Ephraim wore a long beard. It was brown and wavy and almost reached his waist. Without question, he walked home, and after a last look in the mirror and a gentle stoke of his favored possession, he went to work with scissors and razor. He left, however, a mustache and even with that, as he stated afterwards, he looked ‘like a peeled onion.’ Hurrying back to the hall, he was greeted with laughter by everyone but Brigham, who frowned and said, ‘Did I ask you to shave?’ Ephraim nodded. ‘Well, then, go back and do it right,’ Brigham demanded, with a gesture of his hand across the entire face. Without a word of remonstrance, Ephraim did as he was told. President Young discovered that here was a man who would give him strict obedience, regardless of the nature of the request. Here was a man who could be trusted with the most important missions and who would serve in an exacting manner.” 2

Several times his life was spared, he declared, through the guidance of dreams. 3 Ephraim Hanks also possessed the gift of healing to a remarkable degree, and always carried a small bottle of consecrated oil. Often he administered to the sick Indians, with powerful results. To them, from Salt Lake City to the Missouri River, he was known as the man who could talk with the Great Spirit. One particular incident occurred during the winter of 1857, when Eph was carrying the mail from Salt Lake City to Independence, Missouri. “A large tribe of Sioux were encamped a short distance away, and Elder Hanks felt impressed to visit them. As soon as he reached their camp he made his way to the chief’s tent, where he found no one present except an elderly female. Soon, however, the chief came, and the lodge was filled with representative members of the tribe. As Ephraim took his place among them, the chief wanted to know who he was, and where he had come from. Elder Hanks answered that he lived in the mountains and belonged to the people who had pulled handcarts across the plains, and his chief’s name was Brigham Young, who sometimes talked with the Great Spirit. The chief then wanted to know if Hanks himself could talk with the Great Spirit, which question the scout answered in the affirmative. The chief then spoke a few words to the assembled warriors, after which a number of them left he lodge and in a few moments returned, carrying an Indian boy in the blanket. It seems that the boy, while out on a buffalo hunt, had been thrown from his horse. His back was so badly injured that he had not been able to move for months. The chief, pointing to the boy, asked Elder Hanks if he would talk to the Great Spirit in behalf of the injured lad, which Ephraim consented to do. After the clothing had been removed from the boy’s body, Elder Hanks anointed the afflicted parts with consecrated oil, which he always carried with him, and then administered to him in the name of Jesus Christ, promising that he should be made whole from that very moment. The boy immediately arose from his bed of affliction and walked out of the lodge, to the astonishment of all who saw.” 4

Will you go and help them?

In the fall of 1856, I spent considerable of my time fishing in Utah Lake; and in traveling backward and forward between that lake and Salt Lake City. I had occasion to stop once overnight with Gurnsey Brown, in Draper, about nineteen miles south of Salt Lake City. Being somewhat fatigued after the day’s journey, I retired to rest quite early, and while I still lay wide awake in my bed I heard a voice calling me by name, and then saying: “The handcart people are in trouble and you are wanted; will you go and help them?” I turned instinctively in the direction from whence the voice came and beheld an ordinary-sized man in the room. Without hesitation I answered, “Yes, I will go if I am called.” I then turned around to go to sleep, but had laid only a few minutes when the voice called a second time, repeating almost the same words s on the first occasion. My answer was the same as before. This was repeated a third time. When I got up the next morning I says to Brother Brown, “The hand-cart people are in trouble, and I have promised to go out and help them,” but I did not tell him of my experiences during the night. I now hasted to Salt Lake City. 5

I am ready now

I arrived in Salt Lake City on the Saturday, preceding the Sunday (October 26th) on which the call was made for volunteers to go out and help the last hand-cart companies in. When some of the brethren responded by explaining that they could get ready to start in a few days, I spoke at once saying, “I am ready now!” The next day I was wending my way eastward over the mountains with a light wagon all alone.

Early the next morning I was on my way again, and soon reached what is known as the Ice Springs Bench. There I happened upon a herd of buffalo, and killed a nice cow. I was impressed to do this, although I did not know why until a few hours later, but the thought occurred to my mind that the hand of the Lord was in it, as it was a rare thing to find buffalo herds around that place at this late part of the season. I skinned and dressed the cow; then cut up part of its meat in long strips and loaded my horses with it. Thereupon I resumed my journey, and traveled on till towards evening. I think the sun was about an hour high in the west when I spied something in the distance that looked like black streak in the snow. As I got near to it, I perceived it moved; then I was satisfied that this was the long looked for hand-cart company, led by Captain Edward Martin. I reached the ill-fated train just as the immigrants were camping for the night. The sight that met my gaze as I entered their camp can never be erased from my memory. The starved forms and haggard countenances of the poor sufferers, as they moved about slowly, shivering with cold, to prepare their scanty evening meal was enough to touch the stoutest heart. When they saw me coming, they hailed me with joy inexpressible, and when they further beheld the supply of fresh meat I brought into camp, their gratitude knew no bounds. Flocking around me, one would say, “Oh please, give me a small piece of meat;” another would exclaim, “My poor children are starving, do give me a little;” and children with tears in their eyes would call out, “Give me some, give me some.” At first I tried to wait on them and handed out the meat as they called for it; but finally I told them to help themselves. Five minutes later both my horses had been released of their extra burden- the meat was all gone, and the next few hours found the people in camp busily engaged in cooking and eating it, with thankful hearts. 6