Alexander Neibaur’s testimony of Jesus Christ and his gospel 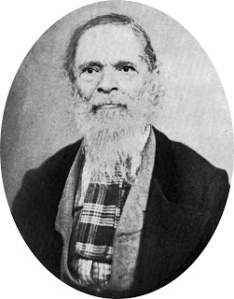 Alexander Neibaur was born in Ehrenbriestein, France on January 8, 1808 to Jewish parents. They were high class. His father was well educated: a physician, surgeon, and linguist. He wanted Alexander to grow up to be a rabbi, but at seventeen, Alexander decided he wanted to be a surgeon and a dentist. He graduated from the University of Berlin before age twenty.

Alexander Neibaur was converted to Christianity shortly after graduating, moved to Preston, England, and met and married his wife, Ellen. When Mormon elders came over to declare the Gospel in England for the first time, Alexander was converted after reading The Book of Mormon in three days – the first Jewish convert to The Church of Jesus Christ of Latter-day Saints.

Through the years, Alexander Neibaur was fiercely devoted to the Church. He helped teach the Prophet German and Hebrew. He fought in the Battle of Nauvoo. Before heading west with the saints after the Illinois persecutions, he fought a man who was insulting the martyred Joseph. He ended the fight by smashing a vase into the man’s head and knocking him unconscious. After his journey west, Alexander would become the first dentist to practice in Utah.

Alexander had a hard life. He travelled thousands of miles and lost his first wife – living thirteen years without her before dying in 1883. Shortly before his death, his son said to him:

“‘Father you have been telling us of your long and hard experience, and we have listened with intense affection and interest. But let me ask you, is it worth it all? Is the Gospel worth all this sacrifice?’

“The glow of testimony and of truth lighted the torches in the dimming eyes of that ancient Hebrew prophet and poet and he lifted his voice in firm and lofty assurance as he said:

“‘Yes! Yes! and more! I have seen my Savior. I have seen the prints in his hands! I know that Jesus is the Son of God, and I know that this work is true and that Joseph Smith was a prophet of God. I would suffer it all and more, far more than I have ever suffered for that knowledge even to the laying down of my body on the plains for the wolves to devour’” …

A short time before the end, his face suddenly lit up and his countenance brightened. He cast his eyes upward as if he could see far into upper distant spaces.

“What do you see, father?” they asked. The dying man murmured clearly, “Joseph-Hyrum-“ then his weary eyes closed forever. With the burning testimony of truth on his lips he closed his life mission, laid down his body, and his soul went to meet and mingle with the redeemed of God… of such is the kingdom of heaven.