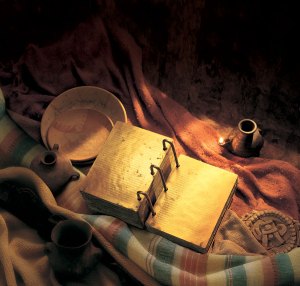 Isaiah 29 deals with a prophecy of a book that is sealed.  Isaiah speaks of a time when the eyes of prophets, rulers, and seers are “covered”.

From the text of Isaiah 29 we read:

And the vision of all is become unto you as the words of a abook that is bsealed, which men deliver to one that is learned, saying, Read this, I pray thee: and he saith, I cannot; for it is sealed:  And the book is delivered to ahim that is not learned, saying, Read this, I pray thee: and he saith, I am not learned.  Wherefore the Lord said, Forasmuch as this people adraw near me with their bmouth, and with their lips do chonour me, but have dremoved their eheart far from me, and their ffear toward me is taught by the gprecept of men: Therefore, behold, I will proceed to do a amarvellous bwork among this people, even a marvellous work and a wonder: for the cwisdom of their wise men shall dperish, and the eunderstanding of their fprudent men shall be hid.  Woe unto them that seek deep to hide their acounsel from the Lord, and their works are in the dark, and they say, Who bseeth us? and who knoweth us?  Surely your turning of things upside down shall be esteemed as the potter’s clay: for shall the awork say of him that made it, He made me not? or shall the thing framed say of him that framed it, He had no understanding? (Isaiah 29:11-16)

Some seminary students will recognize this as an incident from the history of the Church.  Prior to the publication of the Book of Mormon, Martin Harris took some characters copied from the plates to a professor in New York City, Charles Anthon.  From Martin’s account we read: 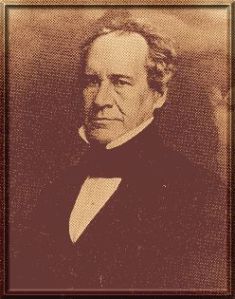 I went to the city of New York, and presented the characters which had been translated, with the translation thereof, to Professor Charles Anthon, a gentleman celebrated for his literary attainments. Professor Anthon stated that the translation was correct, more so than any he had before seen translated from the Egyptian. I then showed him those which were not yet translated, and he said that they were Egyptian, Chaldaic, Assyriac, and Arabic; and he said they were true characters. He gave me a certificate, certifying to the people of Palmyra that they were true characters, and that the translation of such of them as had been translated was also correct. I took the certificate and put it into my pocket, and was just leaving the house, when Mr. Anthon called me back, and asked me how the young man found out that there were gold plates in the place where he found them. I answered that an angel of God had revealed it unto him. “He then said to me, ‘Let me see that certificate.’ I accordingly took it out of my pocket and gave it to him, when he took it and tore it to pieces, saying that there was no such thing now as ministering of aangels, and that if I would bring the plates to him he would translate them. I informed him that part of the plates were bsealed, and that I was forbidden to bring them. He replied, ‘I cannot read a sealed book.(Joseph Smith History 1:64-65)

Isaiah mentions that during this time people will “make a man an offender for a word, and lay a snare for him that reproveth in the gate, and turn aside the just for a thing of nought.”  We live in this time where individuals try to find ways to accuse the prophet of the restoration with wrongdoing, who lay a snare to disparage the name of the Church or its doctrine.  Such has always been the case.  It is even worse when those who work against the prophets are those within the Church.

President Boyd K. Packer stated: Some few within the Church openly, or perhaps far worse, in the darkness of anonymity, reproach their leaders in the wards and stakes and in the Church, seeking to make them “an offender for a word,”as Isaiah said (Isaiah 29:21). To them the Lord said: “Cursed are all those that shall lift up the heel against mine anointed, saith the Lord, and cry they have sinned when they have not sinned … but have done that which was meet in mine eyes, and which I commanded them.  But those who cry transgression do it because they are the servants of sin, and are the children of disobedience themselves. …because they have offended my little ones they shall be severed from the ordinances of mine house.  Their basket shall not be full, their houses and their barns shall perish, and they themselves shall be despised by those that flattered them.  They shall not have right to the priesthood, nor their posterity after them from generation to generation” (D&C 121″16-17).

That terrible penalty will not apply to those who try as best they can to live the gospel and sustain their leaders. Nor need it apply to those who in the past have been guilty of indifference or even opposition, if they will repent, confess their transgressions, and forsake them (President Boyd K. Packer, The Twelve Apostles, Ensign, Nov. 1996).

Isaiah spends some time on the book that is sealed.  From 2 Nephi 27 we learn that this has reference to the Book of Mormon.  While the history related to us from Martin Harris lends us to make the application to his experience with Charles Anthon, it would be useful to make a more personal application.  Perhaps this prophecy has multiple fulfillment. 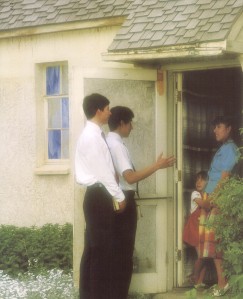 Everyday across the world missionaries invite people to read the Book of Mormon.  Much expense has been put forward to translate this text into the language of the people we take our message to.  When those who are invited to read the Book of Mormon refuse to do so, could Isaiah’s words apply to them?  Is the book not sealed, at least to them?  With this application, Isaiah’s words are literally fulfilled thousands of times everyday.

It is worth asking the youth if the book is sealed to them, right now.  If they do not read from its pages, sincerely asking Heavenly Father to understand its truthfulness and to apply the principles contained therein, perhaps the book is also sealed unto them.  Only by reading from its pages, with the right spirit, can anyone have the Book of Mormon opened unto their understanding.

Years ago I heard the following poem, and although I do not know who the author is, and I believe we do not use televisions in the same fashion as when I was a teenager (perhaps the youth of today spend more time on the internet, for example) the message is applicable.

THE BOOK OF MORMON AND THE T.V. GUIDE

On the table side by side,
The Book of Mormon and the T.V. Guide.

One is well worn and cherished with pride.
Not the Book of Mormon, but the T.V. Guide.

One is used daily to help folks decide,
Nope, not the Book of Mormon, but the T.V. Guide.

As pages are turned what shall they see,
Oh, what does it matter – turn on the T.V.

The word of God is seldom read,
Maybe a verse here or there before they fall into bed.

Exhausted and sleepy and tired as can be,
Not from reading the Book of Mormon, but from watching T.V.

So back to the table side by side,
The Book of Mormon and the T.V. Guide.

The Plan of Salvation is full and free,
But is found in the Book of Mormon, not the T.V.

I write about ways scripture applies in our lives: LDSScriptureTeachings.org
View all posts by LDS Scripture Teachings →
This entry was posted in Book of Mormon, Old Testament and tagged Isaiah, Understanding Isaiah. Bookmark the permalink.

1 Response to Isaiah 29 – A book that is sealed