Today we had a brief conversation about who is speaking in the Doctrine and Covenants.  At times it seems as if the Father is speaking, when the Son is the one who is speaking.  This is illustrated in D&C 29 where the speaker is identified as Christ, who later says that angels declare repentance and redemption “through faith on the name of mine Only Begotten Son.”  This is very confusing to readers as it begs the question as to who is speaking in this section.

Joseph Fielding Smith said, “All revelation since the fall has come through Jesus Christ, who is the Jehovah of the Old Testament. In all of the scriptures, where God is mentioned and where he has appeared, it was Jehovah who talked with Abraham, with Noah, Enoch, Moses and all the prophets. He is the God of Israel, the Holy One of Israel; the one who led that nation out of Egyptian bondage, and who gave and fulfilled the Law of Moses. The Father has never dealt with man directly and personally since the fall, and he has never appeared except to introduce and bear record of the Son .” (Joseph Fielding Smith, Doctrines of Salvation, 1:27.)

Jesus Christ explained to a group during his Palestinian ministry, “I am come in my Father’s name” (John 5:43). Our Lord acted and spoke on behalf of God the Father, such that he could proclaim, “My doctrine is not mine, but his that sent me” (John 7:16). Christ is therefore known as Father “by divine investiture of authority,” meaning that “the Father has placed his name upon the Son, has given him his own power and authority, and has authorized him to speak in the first person as though he were the original or primal Father.” (McConkie, The Promised Messiah, p. 63; see also A New Witness for the Articles of Faith, p. 69.) 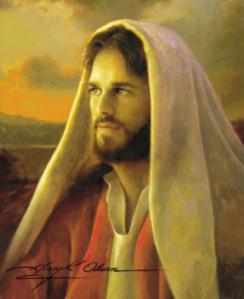 There are numerous instances throughout the standard works wherein we can see this principle in operation. “And [Jehovah] called upon our father Adam by his own voice, saying: I am God; I made the world, and men before they were in the flesh. And he also said unto him: If thou wilt turn unto me, and hearken unto my voice, and believe, and repent of all thy transgressions, and be baptized, even in water, in the name of mine Only Begotten Son, who is full of grace and truth, which is Jesus Christ, the only name which shall be given under heaven, whereby salvation shall come unto the children of men, ye shall receive the gift of the Holy Ghost” (Moses 6:51-52; emphasis added). To Enoch the Lord spoke: “And That which I have chosen [the Savior] hath pled before my face. Wherefore, he suffereth for their sins; inasmuch as they will repent in the day that my Chosen shall return unto me, and until that day they [those in “prison” in the spirit world] shall be in torment; Wherefore, for this shall the heavens weep, yea, and all the workmanship of mine hands” (Moses 7:39-40; emphasis added). Another dramatic occasion wherein the premortal Christ spoke on behalf of his Father is found in the experience of Moses on an unnamed mountain. Jehovah said, “My works are without end, and also my words, for they never cease.” And then he continued: “And I have a work for thee, Moses, my son; and thou art in the similitude of mine Only Begotten; and mine Only Begotten is and shall be the Savior, for he is full of grace and truth” (Moses 1:4, 6; cf. vv. 32-33).

We find the principle of divine investiture of authority particularly prevalent in the Doctrine and Covenants. In fact, there were a number of occasions on which the Lord chose to speak as both Christ and Elohim in the same revelation. For example, in section 29 of the Doctrine and Covenants we read the following verse: “Listen to the voice of Jesus Christ, your Redeemer, the Great I AM, whose arm of mercy hath atoned for your sins” (D&C 29:1; emphasis added). But now note verse 42 of the same section: “I, the Lord God, gave unto Adam and unto his seed, that they should not die as to the temporal death, until I, the Lord God, should send forth angels to declare unto them repentance and redemption, through faith on the name of mine Only Begotten Son” (emphasis added). In Doctrine and Covenants 49 the same principle is at work, this time in an opposite sequence. “Thus saith the Lord; for I am God, and have sent mine Only Begotten Son into the world for the redemption of the world” (v. 5; emphasis added). Now note the last verse of the revelation: “Behold, I am Jesus Christ, and I come quickly” (D&C 49:28; emphasis added). What better way is there to establish firmly in the minds of the Saints that the words of Jehovah are the very same words as those of Elohim; that they have the same mind and thoughts; that they are totally and completely one?

The Book of Mormon demonstrates investiture of authority in yet other ways than those we have considered so far. One of the powerful witnesses of the Nephite and Jaredite records is that Jesus Christ is Father because Elohim has literally invested his Son with his own attributes and powers; in this sense, Christ is Father by inheritance. In the words of Elder Bruce R. McConkie: “How is our Lord the Father? It is because of the atonement, because he received power from his Father to do that which is infinite and eternal. This is a matter of his Eternal Parent investing him with power from on high so that he becomes the Father because he exercises the power of that Eternal Being.”  In like manner, President John Taylor wrote that Christ “is also called the Very Eternal Father. Does not this mean that in Him were the attributes and power of the very Eternal Father?”  (Paul R. Cheesman, ed., The Book of Mormon: The Keystone Scripture [Provo: BYU Religious Studies Center, 1988], 62.)

I write about ways scripture applies in our lives: LDSScriptureTeachings.org
View all posts by LDS Scripture Teachings →
This entry was posted in Student questions. Bookmark the permalink.

4 Responses to Jesus Christ: Father by Divine Investiture of Authority