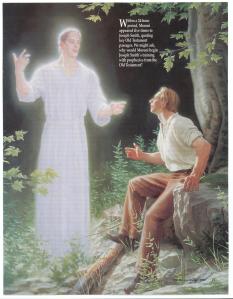 5 After it was truly manifested unto this first elder that he had received a remission of his sins, he was entangled again in the vanities of the world;  6 But after repenting, and humbling himself sincerely, through faith, God ministered unto him by an holy angel, whose countenance was as lightning, and whose garments were pure and white above all other whiteness;  7 And gave unto him commandments which inspired him; (Doctrine and Covenants 20:5-7.)

Yea, blessed are they whose feet stand upon the land of Zion, who have obeyed my gospel; for they shall receive for their reward the good things of the earth, and it shall bring forth in its strength.  4 And they shall also be crowned with blessings from above, yea, and with commandments not a few, and with revelations in their time—they that are faithful and diligent before me.  (Doctrine and Covenants 59:3-4.)

This is according to his mother- Joseph is shown the stupidity of following the adversary, this inspires him to want to always follow God until the very end of his days.  Sometimes when we are in the middle of living the gospel we fail to see what a blessing the commandments are in our lives.  For a time Moroni shows Joseph exactly how the commandments relate to his particular situation in life and this in turn inspires Joseph to be exact in his obedience to Heavenly Father.

Lucy relates: “While Joseph remained here, the angel showed him, by contrast, the difference between good and evil, and likewise the consequences of both obedience and disobedience to the commandments of God, in such a striking manner, that the impression was always vivid in his memory until the very end of his days; and in giving a relation of this circumstance, not long prior to his death, he remarked, that ever afterwards he was willing to keep the commandments of God.

Furthermore, the angel told him, at the interview mentioned last, that the time had not yet come for the plates to be brought forth to the world; that he could not take them from the place wherein they were deposited until he had learned to keep the commandments of God—not only till he was willing but able to do it. The angel bade Joseph come to this place every year, at the same time of the year, and he would meet him there and give him further instructions.”  (Lucy Mack Smith, History of Joseph Smith by His Mother [Salt Lake City: Stevens & Wallis, Inc., 1945], 81.)

I write about ways scripture applies in our lives: LDSScriptureTeachings.org
View all posts by LDS Scripture Teachings →
This entry was posted in Joseph Smith History, Principles and tagged applying the scriptures, Church History, consequences, principles in scripture. Bookmark the permalink.